How We (I) Potty Trained Paisley In 3 Days 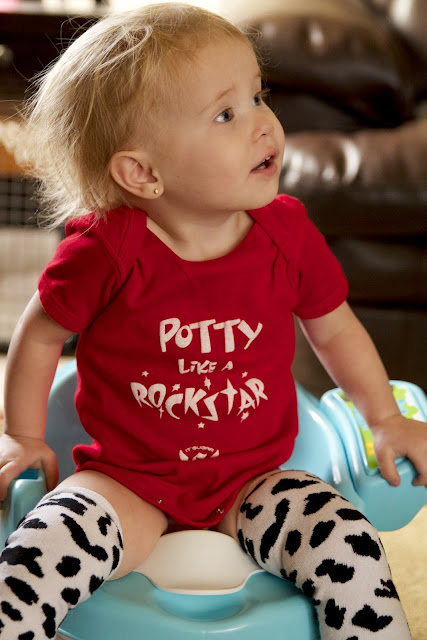 WARNING BE PREPARED FOR MISSPELLED WORDS AND RUNON SENTENCES. I AM REALLY TIRED. :)

Sorry this has taken so long for me to write, life has been crazy. Ok, well to start off I am really happy with how these past 2 weeks have been with the whole potty training thing. To give an overall of where Paisley stands with potty training we keep her in panties in the morning and early afternoon and for her naps/bed time and late afternoon she is in a diaper. The reason why I put her in a diaper in the afternoon is because that is when she typically will have an accident (if she has one). So, until we get her training pants I am just leaving her in her diapers so we don't have to deal with messes (this could back fire on me because Paisley typically will pee within a few minutes of me putting her a diaper because that it what she has done for the past 18 months). My mom is making her training pants. This is the link that she is making them from. http://pinterest.com/pin/258112622365444429/
One of the main reasons why we are making these panties is because Paisley needs to practice pulling her panties up and down. I feel that this is one of the main reasons why I wouldn't consider her fully potty trained (besides nap and bedtime, that's down the road). When she can independently pull her panties up and down I "hope" that she will just start going on her own instead of me having to put her on it every time. Since Paisley does not communicate with me that she "needs to potty" I have her on a schedule, I put her on the potty every hour to hour and a half. When she sits on the potty and puts her hands up in the air I know that she doesn't need to go so I let her up.
I hope you can see these pictures.
First things first.
1. Ryan and Paisley went to the store to pick out a potty and some panties
2. The night before we started we pulled out the potty to let Paisley "check it out".
I even put her on it a couple times (when I went to the bathroom or right before we put her in the bath (because she always pees right then)).
3. Day one. THIS IS SO IMPORTANT......
You need to make sure that you give your child enough opportunities to go potty so that means you need to have enough liquids going through your child. You don't want to give too much liquids because that could be dangerous. This is one of the reasons why I took data, I wanted to see how much was going in and how much was going out. 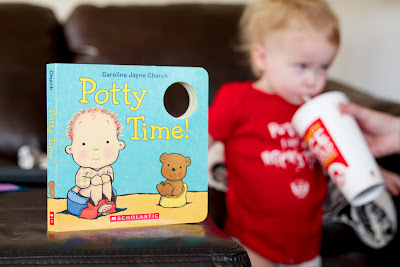 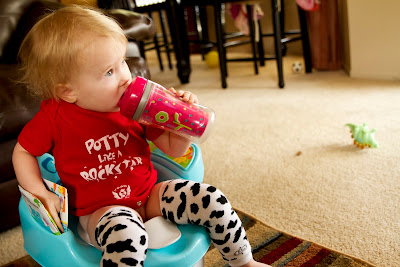 When she went pee I threw a party. I was Clapping and saying "Yea", "good girl" (always make sure you say good job going Pee Pee in the potty so that the child will eventually pair that they are to do that there). Paisley's favorite reinforcer was high fives and I would give her a chocolate chips.
Once she went pee I let her stand up to wipe her and wash her hands. (One thing that I would have done differently which I am doing with her now is having her come with me to put the pee/poop in the big toilet and letting her flush it. This is to help her make an easier transition to go in a bigger toilet).
I chose to keep Paisley naked all day because I didn't want her to think that panties were her diaper.

I then set a timer for 5 minutes.
Made sure the sippy cup still had liquid in it.
Once the timer went off I brought Paisley to the potty and said something like' "ok, time to pee pee in the potty." We would sit and wait until she went. I put her on the potty at 8:10 and she didn't go until 8:30.
Once she went we threw another party and off she went to play for another 5 minutes.
I started to increase the 5 minuter to 10 then 10 minutes to 12 and so on. If she had an accident I went back down to the time of her last success. For example if she went pee and had 10 minutes between pee breaks and then we increased it to 12 minutes but had an accident I took her back down to 10 minutes for a few more tries before increasing back to 12 minutes.
NOTE: Don't increase everytime you can see in my data below. I would have her at 5 minutes for a few successes and then at 10 minutes for a few and so on.
The more I increased the breaks between her potty times the less liquids I started to give her. (This helps children learn how to "hold it" or at least I think so).

**I also really checked how much liquids she was getting and how much she was going. If she hadn't gone in a while but had 3 bottles of liquid in her I stopped giving her drinking until she had gone a few times. 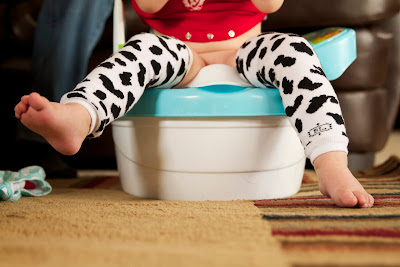 On to the chart below from left to right
Time on Potty- Self explanatory
Time went potty- Self explanatory
Pee or poop- Self explanatory
Accident/Success-
The spots where I wrote S/A I wrote that because Paisley was on her way to the potty but peed on the way and finished on the potty.
One time Paisley literally peed 2 drops, squeezed her legs while looking down and said,"uh-oh" I then quickly put her on the potty which was one foot away and she went potty. I told her good job for holding her pee pee and finishing one the potty.
Time Interval- Time between went potty and next potty time (w.e= went early, If I saw Paisley squeezing her butt or crossing her legs I told her," ok lets try and go potty" because it looks like you need to go).   The second picture I started to put the "goal time" but if she went early I would put the time she went in "(  )".  I like this much better.
Liquid- How much liquid she has been given

Paisley started to say uh-oh when she would have an accident. When she did this I knew she was understanding the whole process.
The first time when she went to bed (8:30) I went and checked on her before I went to bed around 12:30 ish and she was sopping wet, which I figured she would be, with how much liquid she has had. So you might want to check your child before you go to bed incase you need to change them.

Day two WOW!!!
She was a rockstar! I think she only had one pee accident in the morning and one in the afternoon.

The third day
I think she only had one accident and it was in the afternoon,  if I recall correctly.  But like I said she does typically still have accidents and this normally happens when she is really in the "zone" while playing. *******This is also very important or at least in my case, when Paisley has her mind set on doing something or playing with something it's kinda hard to get her mind off it. The last thing Paisley is going to want to do is go to the "potty" if she is playing with something "cool", instead of just transitioning her to the potty and 99.9% having her throw a fit,  I have to get her away from the activity on her own and then transition her to the potty.  I typically ask her is she wants a cookie (aka cracker).

*** OUTINGS ***
OMG I was so nervous for our first outing. We went to church so I was hoping that God would be with use that day. I kept joking and saying that the only reason why she didn't have an accident was because God didn't want Paisley peeing and pooping on his floor.  No, but really I was completely shocked with that day.  I brought her big toilet seat cover and I took her every 20-25 minutes because I was so worried she would have an accident but she didn't. In fact, she didn't even go at church, she held it for an hour and a half.

Some side notes:
If she went poop she got extra chocolate chips and we would go super crazy with excitement.

I started putting panties on her at the end of day two.  By day 3 she was wearing them from the moment she woke up to the minute she went to bed.
Once Paisley was showing me that she was starting to understand that you potty in the potty, she would put her arms up . If she didn't go at the time her timer had gone off, I would let her off and try again in 5-10 min depending on how much she had to drink.  I do this because I don't want her to "HATE" the potty.
Paisley would look down there when she was going potty!

After she was done going potty she would put her arms up in the air (that is what I taught her to do when she is done eating, so I figured I would do that with the potty too until she can verbally say," I'm done".)
You will start to notice that your child is "getting it" if they potty right when you put them on the potty. Just like when you and I go when you sit on the toilet.
(I don't really know how to explain this one so I hope this makes sense) The reason why I would put Paisley on the potty after she had an accident is because I want her to have her next time be a success. Once she was at the point like today,  I would have her help me clean it up (spray the area) and I always say  "Uh-oh you are suppose to pee pee/ Poop in the potty. Then we would take the paper towel and put it in the potty for her to flush it.
I hope that all makes sense??  I hope you all have an easy time potty training and don't get discouraged. I remember the first night that I went to bed I was thinking to myself, "What the heck and I doing????"
I can honestly say I am so happy that I did this,  as many of you know Paisley has very sensitive skin and her butt has never looked better.
, 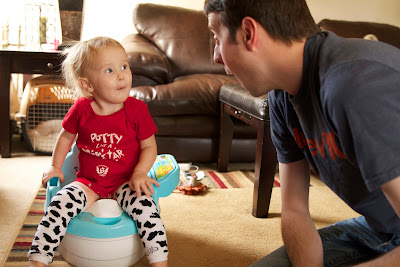 ***Also just my own person opinion,  I think it is important to end on a success before putting the child in a diaper before bed.  I don't know how to explain this because my brain is shot right now :) )

Oh ya Ryan bought a couple of books and Ryan and I were rolling over laughing because they were so funny. One is in the picture and the other one I'll post when I find it. 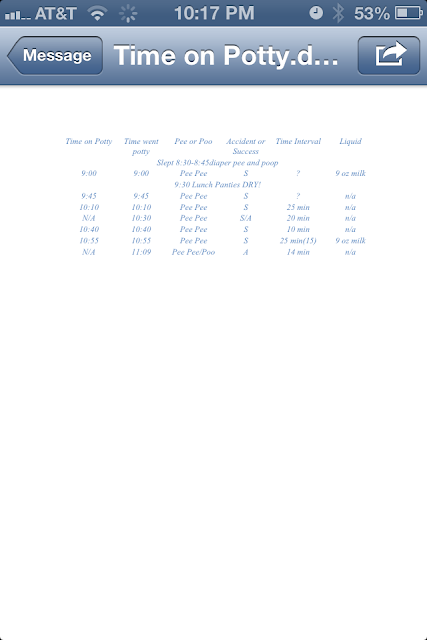 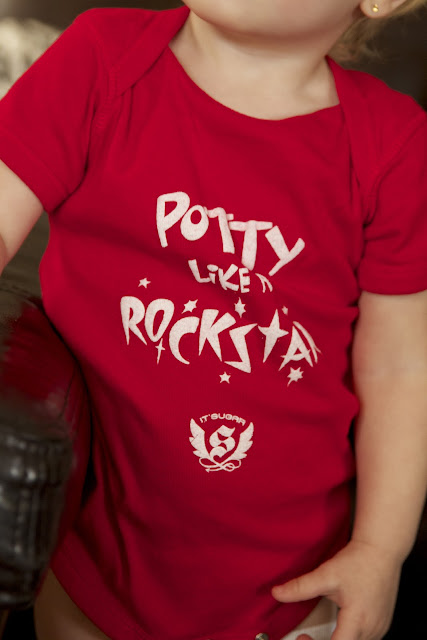 Feel free to ask any questions :) 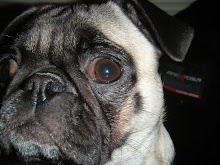 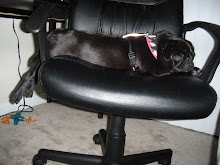